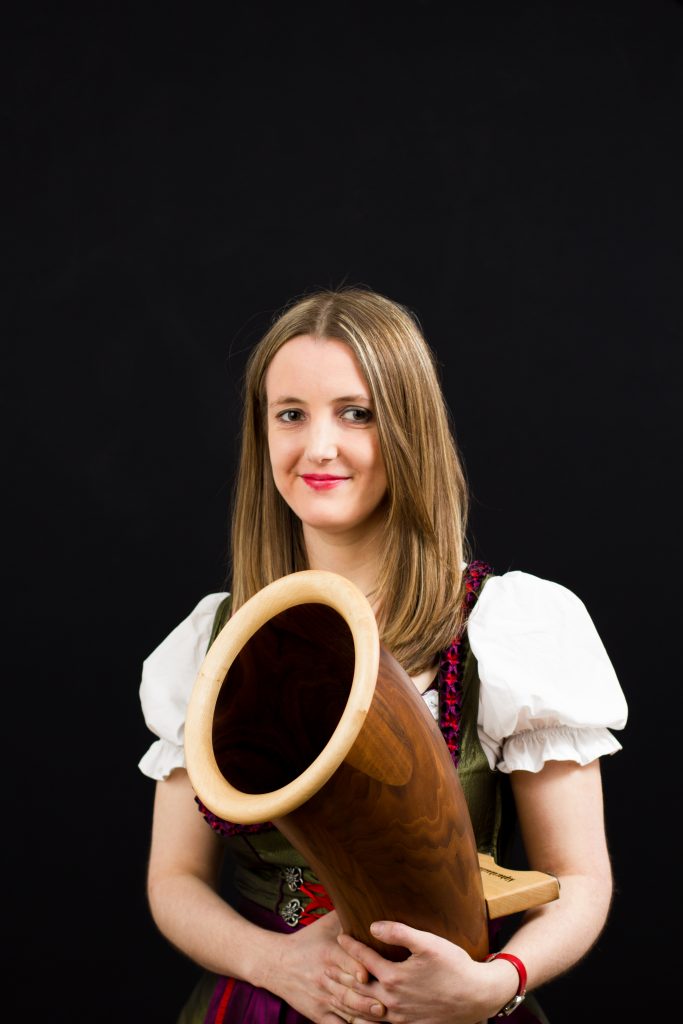 Annette was born in Cardiff and at the age of 8 decided she wanted to play the trombone but was told that her arms were too short. She is eternally grateful for that teacher’s wisdom and began playing the horn instead, rapidly progressing through the local youth ensembles and eventually going on to become principal horn of the National Youth Orchestra of Wales.

Annette studied BMus at Manchester University and Masters at Trinity College of Music. Whilst living in London she worked with various UK orchestras and gained a place on the Orchestra of the Age of Enlightenment’s experience scheme on the natural horn. In 2013 She moved to Zürich to study at the Zürcher Hochschule der Künste. During her studies she played with the Zürich Opera Orchestra and was the horn Academist of Bern Sinfonieorchester for the 2014-2015 season.

In 2016 Annette took a job playing principal horn of the Bulgarian State Opera, Stara Zagora before returning to Zürich where she currently works as a freelance horn and alphorn player and manager of the Alpine sisters, In 2021 she completed a Master’s degree in clinical music therapy and now in addition to her performance activities works as a music therapist with people with dementia and is a member of the board of the Swiss Association of Music Therapy (SFMT). 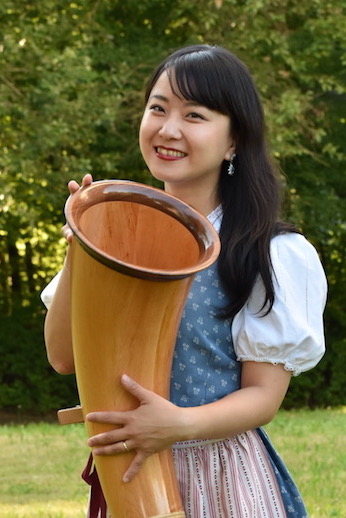 Kumiko Jöhl grew up in Saitam near to Tokyo. After studying music performance in Kanazawa with prof. Hiroshi Matuzaki, she moved to Europe in 2011 to continue her studies with prof. Chrisoph Kohler in Lübeck. In 2016 she graduated with a Master in Performance from the ZHdK studying under Radovan Vlatkovic. In 2019 Kumiko received her second Master title, this time in music pedagogy under the tutelage of Mischa Greull.

In Zürich, Kumiko has played with many ensembles, orchestras and chamber-music formations, including productions in Theater Rigiblick. In 2016 she won 3rd prize in the DMU competition for contemporary music with the wind quintet ‘Toni’. As a soloist she appeared in 2019 alongside Mischa Greull in Schumann’s Konzertstück for 4 horns and orchestra with the Sinfonieorchester TriRhenum Basel. She regularly gives solo concerts accompanied by the organ in churches throughout Kanton Zürich. Kumiko has been playing with The Alpine Sisters Since 2017 and became a permanent member of the group in 2020 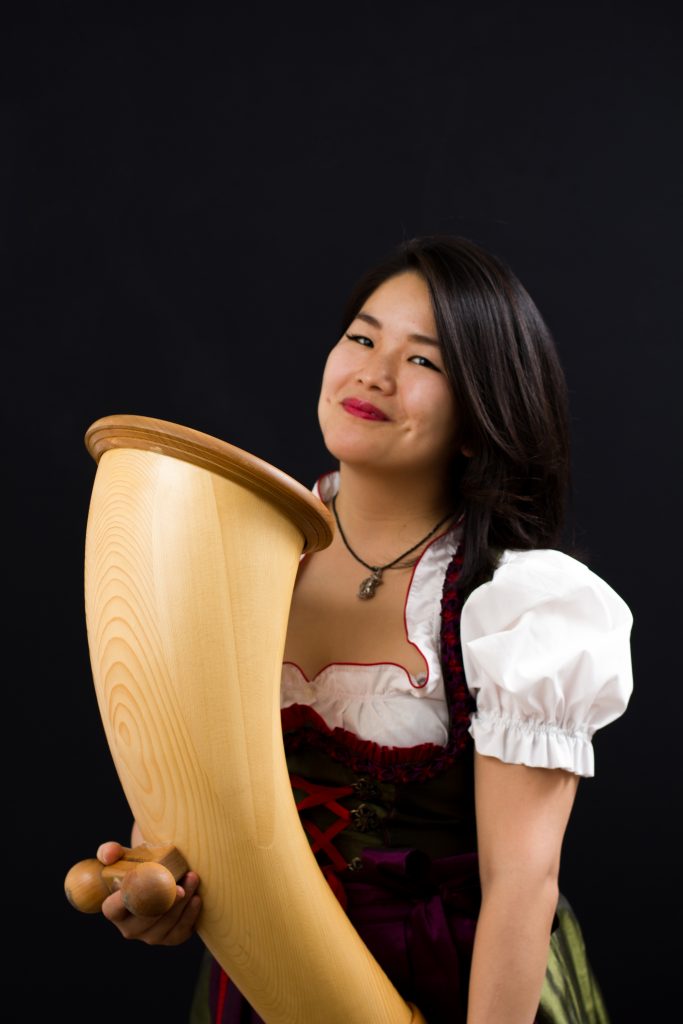 Yui Yukutake was born in Nagasaki, Japan. Her family come from Takashima, a small Island with just 389 inhabitants! After her regular education, she began to study french horn with Ryuzo Miyoshi. Yui then swapped the tranquillity of her Island for the sky-scrapers of Tokyo, continuing her studies with Nobuyuki Mizuno at the Tokyo College of  Music. In 2014 she moved to Zürich to study at the Zürcher Hochschule der Künste (ZHdK) with Nigel Downing.

Yui is a renowned alphorn soloist and in 2018 won the 1st prize in the world’s biggest alphorn competition at the Nendaz international alphorn festival. Yui is studying orchestral Masters with Radovan Vlatković in Zürich and has recently been playing with the Zürich Opera. 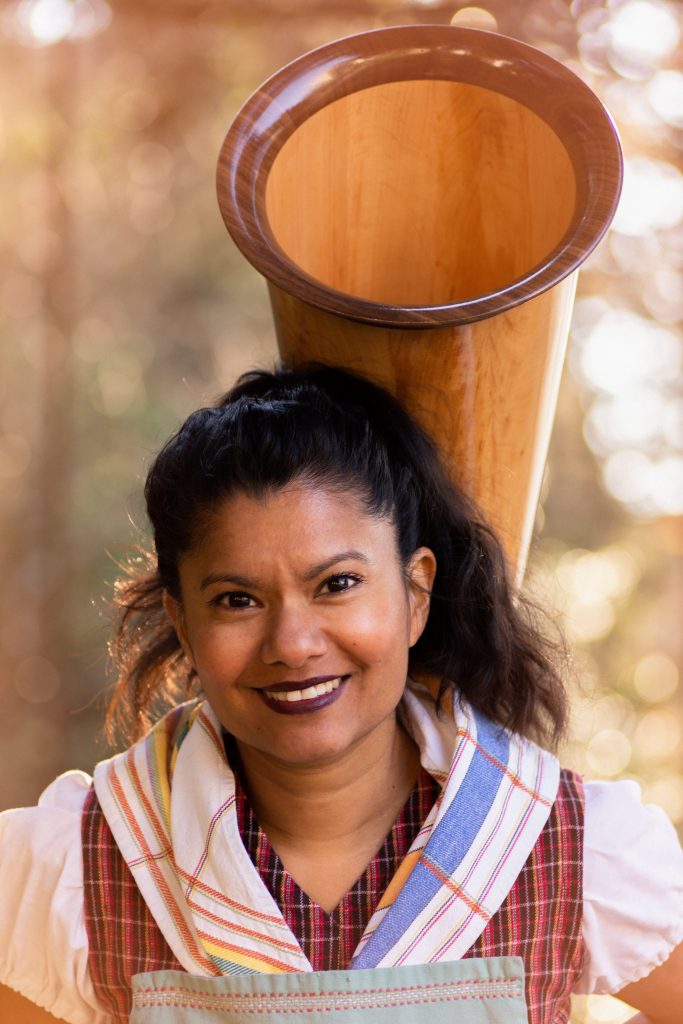 At the age of 12, Jessica Frossard began studying horn at the Freiburg Conservatory. She continued her studies at the University of Music (HEMU) in Lausanne, first in the class of Geneviève Huot, then in the class of Olivier Alvarez. She also studied natural horn in Olivier Darbellay’s class. She obtained her teaching diploma in 2003, then her Master of Arts the following year and two years later, a teaching diploma HEP. She has taught for several years in different colleges while continuing to improve her instrumental level and performing regularly in various orchestral and chamber music concerts. She plays in many orchestras in Switzerland and also likes to go outside of the classical repertoire playing jazz, funk, rock, pop and experimental music.

Jessica started playing with the Alpine Sisters in 2018 and they were delighted when she agreed to become an official member of the group in March 2019, opening up new horizons for them with her experience in improvisation and her exceptional talent for yodeling. 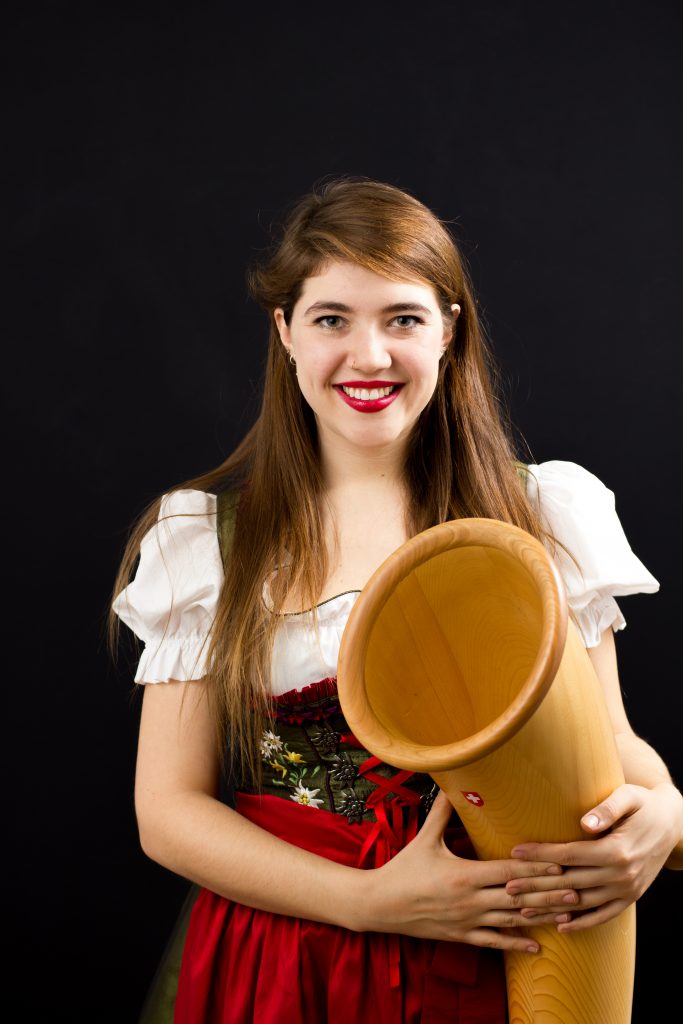 Carlie Bigelow was born in Toronto, Canada. She started playing the horn at the age 11 and quickly joined the local youth orchestras and school bands. She continued on to complete her Bachelor of Music in performance at the University of Toronto studying with Harcus Hennigar.  Whilst in Toronto she had the privilege of performing with the world-famous brass quintet, Canadian Brass. Carlie also worked for the Canadian Forces and was a member of the Royal Regiment of Canada Military Band.

In 2013 Carlie moved to Zürich and in 2016 she completed her Masters in Orchestral Playing from the Zürcher Hochschule der Künste where she studied with Radovan Vlatković. In Zürich she free-lanced with many different local orchestras and discovered alphorn playing.

Since finishing her studies, Carlie has been in high demand as a horn player all over Europe, playing as principal horn of the Bulgarian State Opera Stara Zagora from 2016-2017, before joining the Concerto Orchestra Budapest where she played from 2017-2018 then moving to her current position in the Slovak Philharmonic in Bratislava. She returns regularly to Switzerland to perform with the Alpine Sisters.